After years of heading to New Mexico to compete in a prestigious design competition and coming home empty-handed, in May 2009 Duke finally had not one, but three prizes, with one team taking first place honors in their division.

One winning team designed an inexpensive and reliable wind-powered water treatment system for use in the developing world, while the other devised a system to monitor the efficiency of solar panels.

The competition, held annually for the past 18 years at New Mexico State University, drew student teams from across the country and Canada. The event is sponsored by WERC: A Consortium for Environmental Education and Technology Development. WERC is the formerly-known-as Waste-management, Education and Research Consortium.

“We’ve been getting closer each year,” said David Schaad, civil and environmental engineering (CEE) associate professor of the practice and faculty advisor for both teams. “Because this competition is often part of some of the competing school’s design courses, many of those teams work on their projects all year. Most of our students have less than a semester to complete their entries, from design to fabrication.”

There are usually six tracks in the competition, each one posing a specific real-life challenge or problem to be solved. Each team gives poster and PowerPoint presentations, and fabricates a scale version of their device. All were judged by a panel of scientists, academicians and industry representatives.

The first-place Duke team, led by Adam Dixon, BME senior, designed a monitoring system that takes into account such environment factors as wind, temperature and sunshine in determining if a particular solar unit is operating at peak efficiency. This team also won the Oak Ridge Associated Universities award for developing a prototype, which is closest to being patentable. 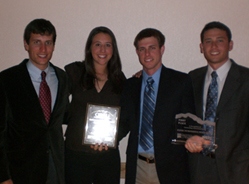 “We designed a system that monitors the output of a particular unit to see if it is performing up to its full potential,” Dixon explained. “As more and more of these solar units are installed, the technical know-how is decreasing. Our system can gauge the effects of environmental variables and give you a percent of how much of the unit’s output is being used and how much is being lost.”

The second Duke team, which garnered “Most Innovative Design” in their division, tackled the task of designing a water treatment system powered purely by wind to supply the daily needs of a village of 100 without the use of electricity.

“We developed a wind-driven device made up of readily available and inexpensive materials,” Ernst explained. “For example, the vertical turbine blades to drive the pump for the full-scale device could be made from empty oil drums. We determined that the device could filter up to 1,000 liters of water a day, more than enough to fulfill the daily needs of 100-person village.”

Ernst and the team hope that other groups that work with people in the developing world – such as Engineers Without Borders – can follow up by using their design in countries in desperate need of clean water.

“This is a great hands-on experience for our students, both inside and outside Pratt,” Schaad said. “When you are able to connect a conceptual thought from your own mind and then to actually see it realized and functional – that’s pretty phenomenal. It’s not only a meaningful reinforcement of the learning process, but a gratifying personal experience.”

Duke and Lord Foundation provided the financial support for the teams attending the competition.

Members of the host consortium include University of New Mexico, New Mexico Institute of Mining and Technology, Dine College, and the U.S. national laboratories at Sandia and Los Alamos.